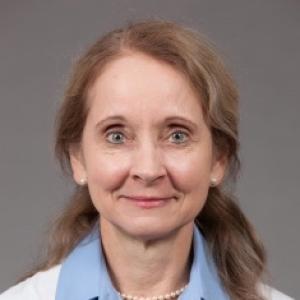 Research in the Foster Lab focuses on autoimmune glomerulonephritis, a major cause of acute and chronic kidney disease worldwide.

Publications from Foster Lab on Pubmed

Our experiments explore the origins and regulation of nephritogenic immune responses, and are designed to identify tolerance mechanisms that regulate nephritogenic lymphocytes, with an emphasis on B cells and autoantibodies; determine the molecular basis of tolerance; identify defects in immune regulation and the contributions of genetic autoimmune predisposition; and identify environmental disease triggers.

For this purpose, the Foster Lab has developed several autoantibody transgenic models that are relevant to immune nephritis in both kidney-restricted and systemic autoimmunity and that are amenable to mechanistic dissection using basic immunological, molecular biological, and proteomics approaches.

We are working to understand gene-environment interactions that lead to a malfunctioning immune system, failed tolerance, and autoimmunity capable of destroying kidneys. A major goal is to develop novel translational tools to bridge the gap between the lab and patients, with the ultimate aim to identify new targets for therapeutic intervention. Our lab has generated over 30 unique mutant murine lines to study autoimmunity within the complex immunological microenvironment that can only be found in vivo. This includes an autoantibody transgene reporter system to track cell populations in vivo in multiple autoimmune backgrounds that collectively model the genetic complexity of the outbred human population. We also use humanized immune system models to support critically needed in vivo studies that facilitate human T cell-B cell interactions, in the context of human disease susceptibility genes and/or disease-linked environmental exposures. Our lab provides a technologically and intellectually rich scientific environment for careful hypothesis-driven research and welcomes undergraduate and medical students and postdoctoral scientists interested in kidney-targeted autoimmunity.

Using an anti-alpha3(IV)NC1 collagen Ig transgenic model, the Foster Lab demonstrated that B cells recognizing disease-relevant epitopes on alpha3(IV) collagen are regulated in vivo; these cells are deleted unless rescued in the bone marrow by receptor editing.

This finding was unexpected because the GPS kidney target epitopes are normally cryptic. Ongoing studies are investigating the role of collagen as tolerogen, the regulatory role of crossreactive antigens, and the molecular basis for escape from tolerance, as well as developing a humanized model for preclinical studies.

Project 3 -- Lupus Nephritis: Glomerulonephritis occurs in up to 75 percent of patients with lupus. This complex autoimmune disease is influenced by genetic and environmental factors.

Using transgenic models that express lupus antibodies reactive with DNA and basement membrane laminin, the Foster Lab demonstrated that the nephritogenic B cells are strictly regulated by deletion, receptor editing, and anergy, both in nonautoimmune backgrounds and in subjects with mild lupus.

Ongoing studies are examining the role of genetic autoimmune susceptibility, including backgrounds prone to develop severe lupus nephritis, in altering the fate of nephropathic B cells. 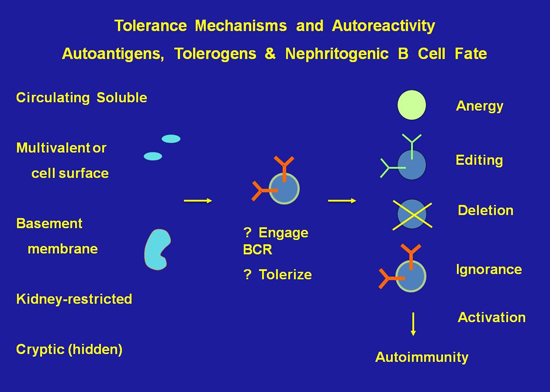 The Foster Lab used representational difference analysis (RDA) and microarray to identify gene expression signatures and key molecules engaged in maintaining anergy in autoreactive B cells in nonautoimmune individuals, and to identify pathways aberrantly engaged or expressed in analogous cells in subjects with lupus. 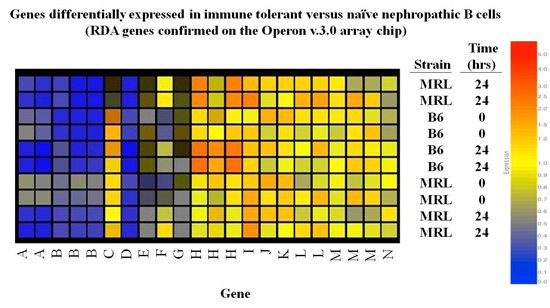 Ongoing studies are assessing the influence of distinct genetic backgrounds on tolerance pathways, and dissecting the role of previously identified key molecules, including galectin-3 and galectin-1, in determining the minimum molecular requirements for energy.