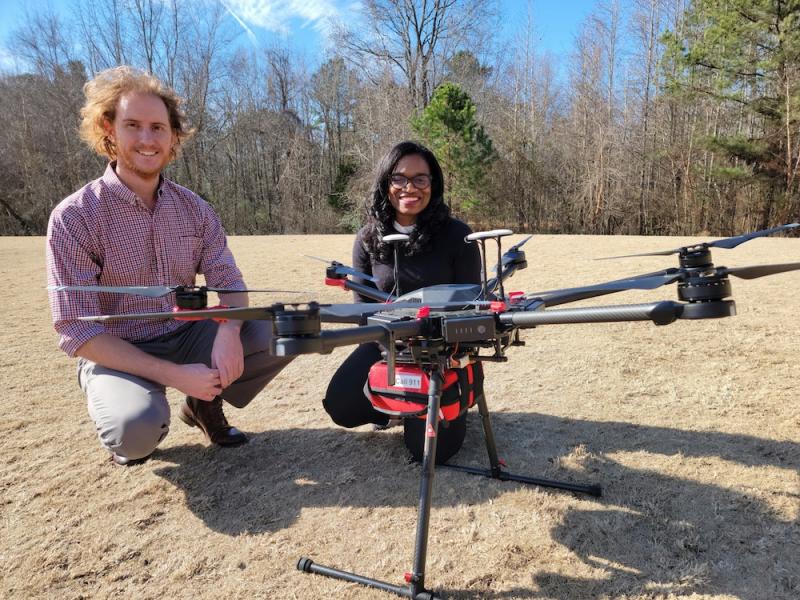 The sudden cardiac arrest of the NFL’s Damar Hamlin on the playing field has stirred intense public interest in critical, life-saving interventions such as the rapid application of automated external defibrillators (AEDs). But Hamlin’s celebrated recovery is atypical. Survival probability for the 350,000 people who annually experience out-of-hospital cardiac arrest (OHCA) in the U.S. is just 10%, where it has stubbornly remained for more than 30 years.

Duke cardiology researcher Monique Starks, MD, MHS, is working to change that. Starks is the first investigator in the U.S. to be funded by the National Institutes of Health to explore development of a drone network that is capable of delivering AEDs to OHCA bystanders, and she’s flying high with some promising early observations.

Building on her work to improve OHCA emergency response times as a co-investigator in the ongoing RACE-CARs trial, Starks and her team have created mathematical simulation models to evaluate the impact of a drone-deployed AED network on treatment of OHCA. Early results show that response times can be reduced enough to meet the critical five-minute resuscitation window required to preserve good neurological function in survivors.

Historical RACE-CARS cardiac arrest data from 48 North Carolina counties shows median response time (from 911 call to AED arrival) can be improved from eight to seven minutes by equipping all first responders with AEDs. But by adding a drone network on top of that, Starks has shown that the median response time could fall to 4.8 minutes, meeting the critical five-minute resuscitation window.

“With a drone network that's optimized for placement in strategic areas within each county, we believe that we can reduce the medium response time for most cardiac arrests to less than 5 minutes, which is tremendous,” says Starks, associate professor in the division of Cardiology and a member of the Duke Clinical Research Institute. Starks and a team of Duke researchers and engineers from the University of Toronto recently presented the data at the 2022 American Heart Association Scientific Sessions.

Despite the low survival probability for OHCA, survival rates of 40 to 60% can be achieved if defibrillation occurs within the first five minutes of collapse. However, defibrillation within this threshold is rare as 70% of cardiac arrests occur in the home. When a cardiac arrest occurs in public, it is rare to know whether an AED is nearby and a significant percentage of first responders do not carry an AED despite arrival to the scene of OHCA before paramedics. In North Carolina, the current rate of bystander defibrillation is 2% while nationally the rate is 4%.

Across the 48 North Carolina counties evaluated, only 16% of cardiac arrests have a response time (from 911 call to AED arrival) of less than five minutes. When a first responder AED intervention is added, the percentage increased to 22.3%. Starks found that further implementation of a drone network increased the percentage of OHCA receiving defibrillation within five minutes to 63%.

“We think equipping all first responders with AEDs is the low-hanging fruit but what we show with our mathematical study is that's a drop in the bucket compared with what drone technology could do,” says Starks.

“The idea of using drones to deliver AEDs within a few minutes of a 911 call is almost 10 years old now and we are still years and a lot of research work away from being ready to do large scale community-based tests of this. But we think it’s worth the effort because in theory, we could get survival rates up to 30-40% or higher and from where we are now that would be a massive breakthrough,” says Starks’s research colleague and clinical cardiologist, Daniel Mark, MD, MPH, professor in the division of Cardiology and Director of Outcomes Research at the Duke Clinical Research Institute. “Dr. Starks is one of the leading investigators in the world working on this incredibly difficult and challenging opportunity.”

“At Duke, we have a history of innovative thinking around ways to increase survival for heart attacks and cardiac arrest,” adds Manesh Patel, MD, Richard S. Stack Distinguished Professor and chief of the division of Cardiology at Duke. “For example, the RACE-AMI pilot study we conducted around getting people to hospitals that can provide coronary intervention and care as soon as possible. Work led by Drs. (Christopher) Granger and (James) Jollis and many interventionalists helped build that network in NC, which was then adopted across the country by the American Heart Association as 'Mission: Lifeline'. One can imagine this type of research for cardiac arrest survival -- with innovations such as drone delivery for AED use -- could also become a national standard if we can show this works.”

Starks estimates that five to eight drones would be needed for most counties in North Carolina to achieve five-minute arrival times for most cardiac arrest patients.

“We really need to move from a static AED delivery model such as the traditional public access defibrillation (AEDs placed in businesses and government institutions) to dynamic delivery (on-demand AED delivery to bystanders),” she adds. “This is where we hope to go in the U.S.”

The next step for Starks is testing over the next three months and pursuit of further funding for pilot programs with some of the 48 North Carolina counties she is working with.

“We've done the math now to show where they the drones are going to go and what the impact will be,” Starks says. “Now we need to work out some of the needed infrastructure and operational aspects of drone AED delivery because it's not just a matter of flying a drone. Fully functional emergency drone networks are several years off, but we have a role to play now in establishing the effectiveness of this technology.”

In search of early diagnosis on pancreatic cancer