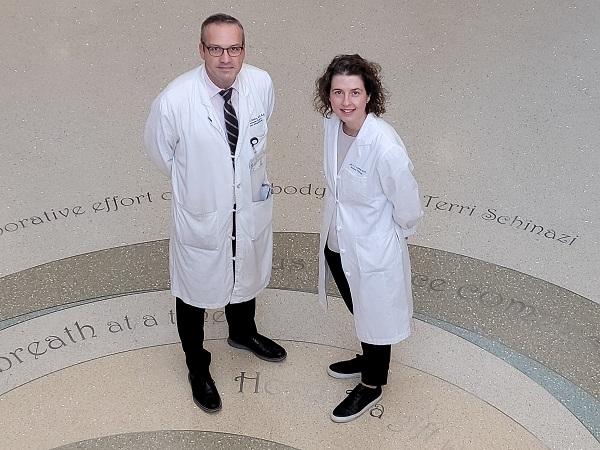 Less chemo, more targeted immunotherapy for all types of cancer: that’s the dream of cancer researchers today. Brent Hanks, MD, Ph.D., and April Salama, MD, associate professors in the division of Medical Oncology, are on the leading edge of helping to make that dream a reality for stage four melanoma patients.

While new immunotherapies have revolutionized treatment options for patients with advanced melanoma over the last 10 years, they only work about 50% of the time. With a deeper understanding of the mechanics behind cancer immunotherapy resistance in these patients, a focus of Hanks’ ongoing research, the investigators hope to develop innovative strategies to augment the efficacy of immunotherapy, thereby expanding the patient population that can benefit.

Hanks and his lab team have uncovered one such mechanism: activation of the NLRP3 pathway, which leads to resistance to PD-1 based immunotherapy, a mainstay of therapy for patients with advanced melanoma. By inhibiting the NLRP3 pathway, Hanks and Salama hope to restore the therapeutic efficacy of checkpoint inhibitor drugs. A trial led by Salama where the NLRP3 inhibitor dapansutrile is combined with the checkpoint inhibitor pembrolizumab has just begun recruiting patients, Dapansutrile Plus Pembrolizumab in Patients with PD-1 Refractory Advanced Melanoma— the DREAM trial, through the Duke Cancer Institute (DCI).

“Clinically, this is just a huge area of unmet need,” says Salama. Despite the hype surrounding immunotherapy, there is a significant number of people that do not benefit because they don't respond initially, they respond and reoccur, or they can't tolerate the side-effects, says Hanks, associate professor of medicine and assistant professor of pharmacology and cancer biology.

“The response rate to first line treatment is about 40% and we can rescue about 20% of those patients with resistant disease,” says Hanks. “But that's about the best we can do.”

Exceeding that 20% benchmark is essentially the DREAM trial goal.

Hanks and Salama are particularly excited about the trial’s drug combination which, based on the underlying biology, is expected to be very tolerable for patients, a major concern with combined therapies. The DREAM trial is the first time the combination has been tested in cancer patients.

“I call it the double-edged sword,” Salama says. “We're activating the immune system to try and target the cancer, but we also over activate the immune system which turns on the patient's own body and creates unwanted inflammation. So, the tolerability of combinations is really key.”

The trial is supported by co-sponsors Merck and Olatec Therapeutics, which is supplying the study drug dapansutrile.  It is being conducted in two parts, the first is dose selection for dapansutrile with acceptable tolerability in combination with pembrolizumab. Part 1 consists of up to two dose selection cohorts to evaluate the safety and tolerability of dapansutrile with pembrolizumab to find the recommended Part 2 dose expansion, which assesses the preliminary efficacy of the investigative drugs. Once all patients in Part 1 have completed four weeks of dapansutrile therapy, the expansion phase will start enrolling patients. Part 2 will also include a 14-day lead-in period of dapansutrile monotherapy.

The DREAM trial builds upon years of work by Hanks’ lab to better understand the underlying mechanisms involved in the development of adaptive resistance to immunotherapy, work that may also be informed by the DREAM trial.  The Hanks group’s work has led to the identification of a novel tumor-intrinsic NLRP3 inflammasome dependent pathway that appears to play a key role in the adaptive recruitment and accumulation of granulocytic myeloid-derived suppressor cell populations in tumor-bearing hosts that occurs in response to the activation of local effector CD8+ T cell populations.

Identification of the pathway provides a therapeutic target for use of the investigative drug that will be combined with checkpoint inhibitor immune-therapy. Simultaneously, the pathway can also provide potential biomarkers that allow for identification of patients at risk for developing hyperprogression in response to treatment or resistance at baseline, Hanks notes.

Hanks’ team has also discovered a novel underlying mechanism of immunotherapy associated toxicities that involves the process of tumor-mediate innate training of neutrophil populations in the host.  “With a better understanding of the underlying mechanisms, we believe that we can identify strategies that suppress the development of these immune-related adverse events while avoiding any negative impact on immunotherapy efficacy,” Hanks says.

Each of area of investigation is being conducted with the goal of ultimately identifying both novel therapeutic targets and biomarkers to determine which patients will benefit from select immunotherapy regimens. (A potential biomarker study would require large numbers of patients but initial steps toward that goal is now ongoing in Hanks’ lab.)

“As part of this process, we foresee our work outlining specific patient sub-groups that are capable of responding to a specific immunotherapy combinatorial regimen,” he says. “This tailoring of immunotherapy strategies will be necessary to enhance therapeutic efficacy and overcome anti-PD-1 resistance while minimizing toxicities in the future. “

While there is a significant percentage of people who do not respond to therapy, there is also another smaller proportion of patients that develop acquired resistance where tumors initially shrink but then start to grow again. The cause is not understood but Hanks’s science suggests that the NLRP3 pathway plays a role.

The other big question for Hanks is to better understand what tumors are more prone to using the NLPR3 pathway. “A biomarker based on this pathway can be very useful for determining which of these patients could be susceptible to this complication,” he says.

From a genetic perspective, there are likely some underlying alterations in the patient, the tumor, or both that could be contributing to resistance. Hanks is working on that, too, supported by a foundation grant from the American Society of Clinical Oncology (ASCO) to sequence the DNA of patients as they start treatment.

The DREAM trial began recruiting patients in September 2022 and concludes in August 2027.