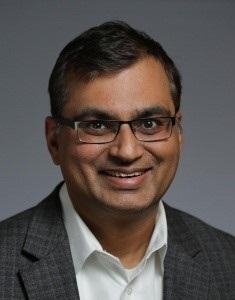 At the beginning of his senior year in college as a computer science major, Sandeep Dave, MD, MS, wanted a career in artificial intelligence (AI). By the end of the year, after researching and writing about AI for his thesis, Dave decided to change course.

“I came away very unhappy at what passed for artificial intelligence,” says Dave, a professor of Hematologic Malignancies and Cellular Therapy. “Computers playing chess is one thing, but being able to model language and reasoning—those things still remain out of reach for even the state-of-the-art technologies today. That made me think of human mechanisms, human physiology, and the wonder that underlies it.”

Always interested in biology, Dave began thinking about the physiological processes that explained what actual human intelligence really was, and he applied to medical school, eventually attending Northwestern. “I was the only person there with a degree in computer science, which seemed not to be very relevant at the time,” he says.

Ultimately, Dave became an oncologist who focuses on blood cancers. But his background in computer science became increasingly relevant as a genomic revolution unfolded, with the mapping of the human genome and the approval of gene-targeted drug therapies. During his residency at Northwestern and fellowship at the National Institutes of Health, Dave found his unique skills set him apart from others, and eventually they drew him to Duke in 2007. In May 2022, Dave was named the Wellcome Clinical Distinguished Professor in Medicine for his contributions and continued work on genetic and computational methods to better understand blood cancer.

Blood cancers are particularly tricky because there are so many subtypes, Dave says. Two patients with the exact same cancer diagnosis can have very different tumors at a molecular level, meaning the same treatment may not work for both patients. Examining each type of blood cancer and defining its genetic vulnerabilities can help with the development of target therapies. Over the course of 10 years, Dave’s lab has scaled up their methods from studying tumors from hundreds of patients to more than 10,000 patients. They have also developed tools to perform genetic profiling on this larger scale, which is possible through sophisticated computation and analysis. The larger scale application can enable quicker diagnoses and more customized treatment plans for patients with blood cancer.

“What we’ve done is to develop a global consortium of over 25 institutions in the world that collaborate and pool their patient specimens, allowing us to comprehensively study the genetic makeup of blood cancers,” Dave says.

Dr. Nelson Chao, MD, MBA, Donald and Elizabeth Cooke Professor and chief of Duke’s Division of Hematologic Malignancies and Cellular Therapy, says Dave’s discoveries have been an integral to his division. “His seminal work on genetic signatures has been critical in helping us understand the different types of lymphoma.”

Dave’s lab has focused on mapping the genomic makeup of all 100+ types of blood cancer, including lymphomas—blood cancers that occur in the lymphatic system. Understanding what drives the tumors is at the crux of the research, and he believes the tools they develop can shorten diagnosis time from 2-3 weeks to a couple of days while also helping create more targeted therapies.

With the growth of technology and computing capabilities, students today are much more likely to have some training in tackling vast data sets. But two decades ago, when Dave applied for his fellowship at the NIH, he stood out among his peers. “I remembered seeing his application and thinking, wow, this is an unusual guy,” says Cynthia Dunbar, senior investigator at the NIH and Dave’s supervisor and mentor during his fellowship. “He was very quantitatively sophisticated and worked with these huge data sets.” At the time, Lou Staudt, NIH distinguished investigator in the National Cancer Institute, was working on the Lymphochip, a precursor to the microarray and the first large-scale, population-based ability to look at gene expression. Dave was able to work with the data in a way that most people in medicine and biology at that time had no idea how to do, Dunbar says. “It was sort of perfect timing.”

Dunbar says Dave’s ability to look for data patterns that have meaning clinically is a special thing: “There’s a lot of people who are quantitatively astute data scientists, but they don’t understand the medicine. Having both in the same person is super important.”

Leo Gordon, professor at Northwestern Feinberg School of Medicine, worked with Dave when he was a medical student and resident. “It was evident from our first meetings that he had the makings of a serious physician-scientist,” says Gordon, who mentored Dave and encouraged him to pursue the position at Duke and has since collaborated with him on research projects and publications. “There is nothing better in academic medicine than to see someone in the embryonic stages of a career grow to be a prominent force in his field. It is my honor to have observed that.”

Collecting, comparing and categorizing blood cancer cell data will potentially have a huge impact on patient care and outcomes, Dave says. While the current goal is mapping every type of blood cancer, the work doesn’t stop there. “It’s not meant to be one endpoint,” he says. “There will be many endpoints and each of those has meaning.”

Dave’s lab also hopes to have an important impact across the larger cancer research community. The heterogenous nature of blood cancer makes it a bit more difficult to study, he says, but he’s OK with that. “In a way that was good because we’ve kind of done the heavy lifting in terms of tool development and methodologies,” he says. “The hope over the coming years is to expand the scope of this to every type of cancer.”

“Dr. Dave’s contributions to the Department of Medicine have been invaluable,” says Kathleen Cooney, MD, chair, Department of Medicine. “His work to comprehensively study genetic signatures and his ability to analyze clinical data stands apart in helping us not only better understand blood cancers but puts researchers in a better place to develop more targeted, personalized therapies.”

Dave says it is humbling to be named a distinguished professor, especially since he traveled a path so different from many of his peers. “It represents a recognition of a very long journey,” he says. “Knowing that Duke values the work we do and recognizes it in that way is very meaningful.”