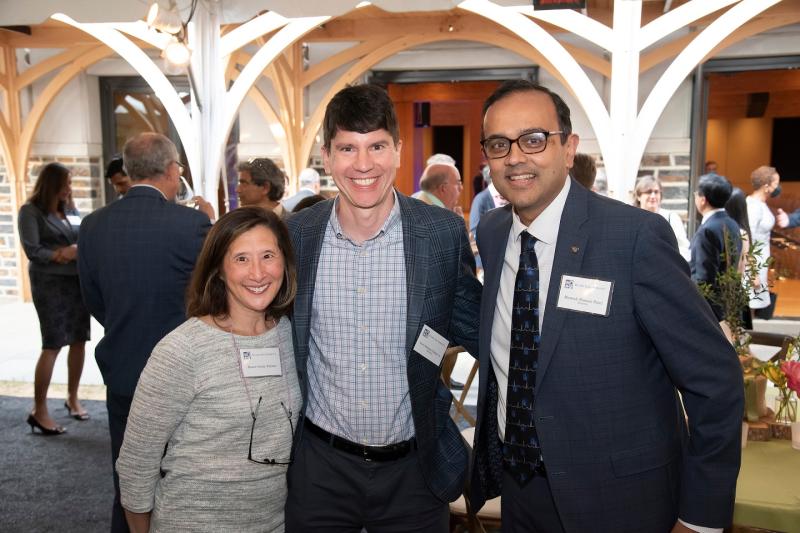 When William J. Fulkerson, MD, former executive vice president for Duke University Health System, was chief of pulmonary medicine back in the 90s, camaraderie among attending physicians of the day frequently included light-hearted banter about who among them could expect a productive or a challenging month of clinical service depending on the team surrounding them.

On the 1996 summer day when Duke-trained pulmonary fellow Scott Palmer, MD, MHS, showed up for duty, Fulkerson knew that this teaming experience was going to be different—extraordinarily so.

Palmer was “incredibly smart and knew his stuff,” Fulkerson recalls, yet he stood out for other reasons, too. Discipline and careful attention to detail made Palmer seem more an equal than student. “Scott as a fellow was really ahead of his time,” says Fulkerson, who has been a key clinical mentor to Palmer. “As he focused on the area of lung transplantation and carried those traits with him, along with other team members in medicine and surgery, the lung transplant program at Duke continued to grow to be one of the best, if not the best, in the world. That's just extraordinary.”

Since his days as a fellow, Scott Palmer, MD, MHS, has become an internationally regarded leader and researcher in pulmonary diseases and transplant medicine.  Today, he is one of the top-funded investigators in the Duke University School of Medicine, having received continuous National Institutes of Health (NIH) funding for over 20 years that includes numerous high impact studies. Palmer is currently leading a $21 million seven-year NIH grant to support better care of lung transplant patients. This spring he earned a top academic accolade as the newly appointed Duke University School of Medicine Donald F. Fortin, MD, Distinguished Professor of Medicine.

“When I think about the caliber of people across campus that are distinguished professors, it's humbling and a huge honor to think about myself in that same group,” says Palmer, vice chair for research in the Department of Medicine and director of the Medicine Plus Therapeutic Area at the Duke Clinical Research Institute with secondary appointments in Immunology and in Population Health.

Palmer joined the Duke faculty in 1999 as medical director for Duke’s lung transplantation program. Few institutions at the time were doing these lung transplants, even fewer successfully. Palmer brought a superior level of research rigor to the program, his colleagues say, setting the bar higher in the field of transplantation with better quality data to inform decisions around patient care.

With chronic rejection being one of the biggest complications in lung transplantation, Palmer has been at the forefront of better understanding the risks for this condition, the pathogenesis of lung rejection as well as leading in the development of novel treatments.

As an expert in lung transplant, Palmer is also motivated to study diseases such as idiopathic pulmonary fibrosis (IPF) and related interstitial lung disease (ILD), currently the leading indications for transplant. Through the DCRI, Palmer leads an observational study that has enrolled and prospectively follows over 1,400 patients with IPF or ILD. In collaboration with other DCRI co-investigators and those at other sites, over 15 publications and 60 abstracts have been generated that have advanced our understanding of the disease progression, its impact on patient quality of life, and disease biomarkers. His studies also include seminal work that identified rare protein coding variants in telomerase related genes as part of the underlying genetic architecture in IPF.

One of Palmer’s most significant contributions to medicine is his work with the Lung Transplant Clinical Trials Network (LT-CTN), a large, multicenter lung transplant research consortium. Palmer in 2014 led an initial Clinical Trials in Organ Transplantation (CTOT) funding application to support the creation and infrastructure ofLT-CTN, the funding for which was recently renewed by the National Institute of Allergy and Infectious Diseases (NIAID).  NIAID administers the CTOT with $21 million over seven years to support interventional trial and mechanistic studies. The LT-CTN is the first CTOT-funded program to focus on adult lung transplant.

The LT-CTN conducts over 600 lung transplants a year, the largest program in the U.S. based on the number of transplants performed, and has some of the shortest wait times in the nation. With Duke serving as the lead, the LT-CTN— now a flagship endeavor for Duke Medicine—includes eight centers in North America and will study adolescent lung transplant recipients as well as adult. Palmer will serve as one of three principal investigators.

As a leader in conducting translational and multisite research, Palmer’s third-year research mentor, David Pisetsky, MD, PhD, professor of medicine and immunology and associate vice chair of academic affairs in the Department of Medicine, notes that Palmer’s talent for team building is a key to his academic success even evident during his time as a medical student at Duke.  Palmer, in fact, has become an important and influential mentor in his own right.

“The one word that keeps coming back to me when I describe Scott is genuine,” Pisetsky says. “It was always fun to work with Scott. It’s like many activities, when people enjoy the work they get more involved. He was thinking, always asking good questions, but it’s more that he is genuinely interested in the work and in the people he works with.”

Palmer enjoys team-building, and it is one of his greatest strengths. Humor and good cheer play a big role. His way of informing his research staff of the distinguished professorship appointment, for example, was to advise them about a “funny-looking chair” that would soon be arriving and to not send it somewhere else as it is, indeed, meant for him.

Palmer has had many highly successful trainees who have carved out substantial research careers of their own.

One of them is LT-CTN investigator and pulmonologists, Jamie Todd, MD, MHS, who will oversee research in the Duke Innate Immunity core lab. “While his enthusiasm for his science was no doubt infectious, what drew me to his laboratory was the fact that he truly demonstrated as much care for me as a person as he demonstrated for my success as a researcher,” says Todd, who came under Palmer’s mentorship as a pulmonary fellow in 2010. “Givenhis emphasis on the centrality of human values, Dr. Palmer’s approach fosters a robust camaraderie among his mentees and other laboratory personnel. This facilitates healthy corroboration and a free exchange of ideas where one acts as both teacher and learner and all involved are sharpened by the process. Everyone has a seat at the table; everyone’s voice is equally encouraged and respected.”

Scott has directly mentored over 35 pre- and post-doctoral trainees over the years. Common themes among them are the attainment of advanced research degrees, a focus on executing clinical and translational research that is of high impact and high quality, and application for funding awards even at a very early stage, Todd notes.

Aparna Swaminathan, MD, assistant professor of medicine and member in the Duke Clinical Research Institute, credits Palmer with her academic success. “He constantly challenged me to think about my long-term goals and, in doing so, helped me recognize and develop my passion,” she says. “Scott has taught me so much by his everyday role modeling, particularly with regards to the importance of scientific rigor and the responsible conduct of research.”

Wayne Tsuang, MD, MHS, a pulmonologist at the Respiratory Institute, Cleveland Clinic and assistant professor at the Cleveland Clinic Lerner College of Medicine, credits Palmer with the trajectory of his career as a lung transplant physician-scientist.

“His mentorship introduced me to the world of research and lit a spark that made me change my career goal,” says Tsuang. “I would not be doing the independent NIH-funded research that I'm doing today were it not for Dr Palmer. From each of the funding and publication successes I have been fortunate to achieve, I can draw a straight line directly back to my time at Duke and the lessons I learned from Dr Palmer.  Though it's been awhile since I completed pulmonary fellowship, I still regularly seek his advice and counsel.”

Palmer, his mentees say, is a master physician-scientist who not only taught them how to do research but how to be skilled clinicians. Tsuang worked with Palmer in his outpatient clinic, inpatient lung transplant team, and in the bronchoscopy suite.

“I saw how he cared for patients and how much patients trusted him,” Tsuang adds. “So much of how I practice lung transplant medicine at the bedside today I learned from watching Dr Palmer. More importantly, I saw how he took those clinical experiences and used them to inform his laboratory research. Those lessons I learned back then I now pass on to the trainees I work with here at Cleveland Clinic.”

“Having done this for so many years now, it is a joy to see trainees everywhere,” Palmer says, “regardless of if they went into cardiology or pulmonary or any other area of medicine, to know that I was able to contribute in a small way to their career success is deeply gratifying.”

In his role as DOM vice chair, Palmer has led numerous efforts to improve the quality and rigor of research processes at Duke, as well as the career development of physician-investigators across the University. He is particularly excited about the two recently funded NIH R38 grants (one each to Duke from NIAID and NHLBI) that have supported intense dedicated research time for residents training in internal medicine, surgery or pediatrics.  As MPI on two R38s, he has worked with leaders in Surgery and Pediatrics to use this new funding to foster the scientific development of a new generation of physician investigators.

Palmer is also very proud of the Vice Chair research team that has established a new grant writing program for DOM fellows and provides dedicated mentored writing support for junior faculty with K grant submissions.  He is also addressing critical gaps and vulnerabilities in the physician-scientist development pipeline working with the DOM leadership to build programs that support promising investigators through funding transition points.

“Scott Palmer’s leadership in research has continued the tradition of excellence in research in the Department of Medicine, says Kathleen Cooney, MD, MACP, chair, Department of Medicine. “He continues to foster junior faculty and fellows as researchers and supports them in their journey of being awarded their first grants. His leadership has allowed this department to continue its growth trajectory of increased funding and diversify our research strengths. Not to mention, his research in lung transplant is unparalleled and world-renowned.”

“My biggest goal for the department is create an environment where a diverse group of highly talented faculty succeed by pursuing research that makes them excited to be here. Particularly for our trainees and junior faculty, my vision is to make the DOM a supportive home that provides value added in support of faculty research efforts,” he says.