Pharmacology Studies Fuel a Quest to Shed Drug Side Effects 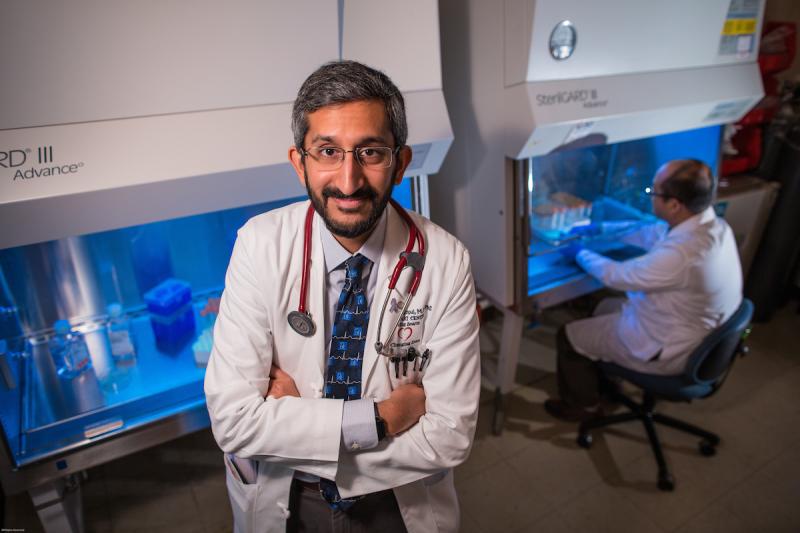 In 2016, the Duke School of Medicine selected 38 of its faculty for the new Duke Health Scholars and Duke Health Fellows Program. With funds from the Duke University Health System, the program supports the research efforts of early to mid-career clinician-scientists at Duke. Among the faculty honored are 14 individuals from the Department of Medicine, including Sudarshan Rajagopal, MD, PhD, assistant professor of medicine (Cardiology) and Duke Health Fellow recipient.

In clinic, cardiologist Sudarshan Rajagopal, MD, PhD, has no means to cure most patients with pulmonary hypertension, not the narrowing of blood vessels in their lungs, not damage done to their hearts.

The physician-scientist can prescribe medicines that extend the lives of many patients, but the precious gains can come with unwelcome costs.

“All these drugs help open blood vessels in the lungs and help treat heart failure. But they can have horrible side effects,” Rajagopal says, including nausea, diarrhea, weight loss and other side effects.

But help may come from complex pharmacology studies that Rajagopal first encountered at Duke in the laboratory of Nobel Prize winner Robert Lefkowitz, MD. Specifically Rajagopal wants to take advantage of the ability of some receptors on the surface of some cells to induce only specific changes within cells.

“Sudar's work reveals both fundamental mechanistic pathways as well as broad and novel therapeutic directions,” said Mary E. Klotman, MD, Dean of the School of Medicine and former chair of the Department of Medicine.

Rajagopal trained for years to try to have impact. His Indian immigrant parents, his father is a mathematician and his mother trained in anthropology, always encouraged him while growing up in Pittsburgh to study math and science. Luckily he liked both.

After earning a bachelor’s degree in chemistry from the University of Chicago, Rajagopal remained a student there to pursue a medical degree and a doctorate in biochemistry and molecular biology. Medicine appealed because it provides quicker rewards and makes science relevant, he says.

During lab bench training in Chicago, Rajagopal proved he was more than capable at finding ways to study difficult-to-observe basic biology. In one major project, he used nanosecond-scale laser pulses and custom software to make molecular movies of changes in bacterial photoreceptors.

After an internal medical residency at Duke, Rajagopal joined the Lefkowitz lab in 2008 as a research fellow. Quickly he began investigating newly understood implications of variation among surface cell receptors, the structures that permit molecules outside of cells to influence what occurs inside cells. Hormones, neurotransmitters and other molecules all bind to them.

Lefkowitz decades before had discovered the largest family of these receptors, "G-protein-coupled receptors," which are common targets of many modern medicines. Rajagopal started documenting what happened when molecules binding to receptors prompted selective biochemical changes inside cells, activating some pathways while blocking others.

Understanding such precision could guide design of new medicines that produce disease-fighting changes in cells without triggering side effects. “If it turns out the same pathway is critical to opening blood vessels in the lung and causing a side effect, we’re unlikely to get around it. But if we find out that those responses are regulated by different mechanisms, we could develop a drug that affects one pathway and not the other,” Rajagopal says.

Leading his own laboratory since 2013, Rajagopal already is making progress. He has demonstrated that this biased signaling is in play among chemokine receptors that help immune cells produce inflammation in tissues in mice. Inflammation is an invaluable defensive weapon against pathogens but it’s increasingly observed in the tissues of patients with pulmonary hypertension as well as cancer, atherosclerosis and heart failure.

Rajagopal induces pulmonary hypertension in mice and rats to try to better understand the molecular roots of the disease. And he is developing a repository of blood samples donated by Duke patients with pulmonary hypertension. Studies of those samples could help reveal the molecular biology in play in various forms of the disease seen in people and more.

“That will allow all Duke pulmonary hypertension investigators to determine if findings in animal models hold up in humans and advanced phenotyping and genomic and metabolomic profiling of pulmonary hypertension,” says Michael D. Gunn, MD, chair for basic science for the Department of Medicine Research Development Council.

Rajagopal hopes all his efforts will spawn better and more tolerable treatments for the patients he sees at Duke and Durham Veterans Administration clinics.

“These studies could allow us to translate basic receptor biology discoveries from the bench to the ultimate goal for any biomedical research — novel drugs for human disease,” he says.