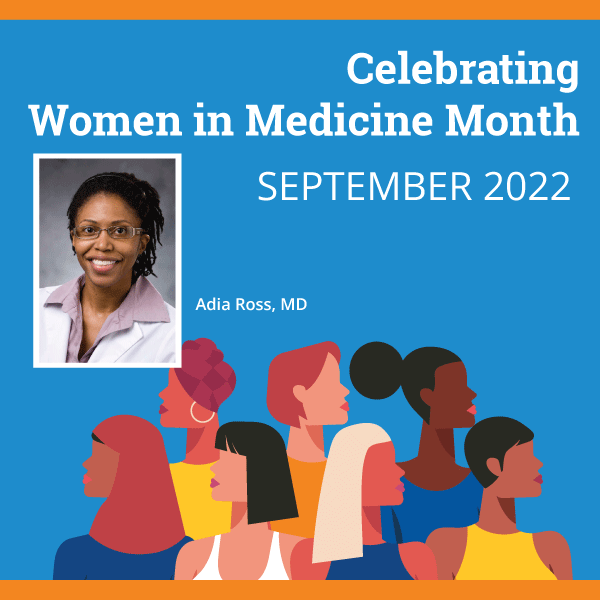 It all started with ice cream; an especially tempting and refreshing treat on a hot, Florida day when you’re four.

But the simple joys of childhood—having an ice cream, playing with friends in her parent’s grassy yard in St. Petersburg, just being a normal kid—were not always options for Adia Ross MD, MHA, chief medical officer of Duke Regional Hospital (DRH) and assistant professor of General Internal Medicine. As a small child, she suffered from severe asthma. It was so bad, in fact, that her pediatric immunologist wondered if she would even make it past childhood.

But that all changed when Ross came under the care of St. Petersburg allergist, Stephen Klemawesch, MD, a fellow in allergy and immunology at Duke University Medical Center in the early 1980s. Little did Ross know at the time that Duke Health would come to play such a major role in her life, but a seed was planted: Ross began dreaming about becoming a doctor like Klemawesch.

“My mother remembers me saying, ‘I feel so much better! I want to do that for other little children. I want to be a doctor and make them feel better,’” Ross says, “She was like, ‘Oh, my gosh! A four-year-old said that!’”

Ross is the first doctor in her family, whom she describes as civic-minded caregivers that fed her dream of becoming a physician with can-do encouragement and the expectation that she would choose a course in life to help make the world a better place.

Adia Ross is doing just that.

Building on a Dream

Ross, who has served as DRH’s chief medical officer since January 2020, is today a visionary leader within Duke hospital medicine.

Adia Ross’s leadership philosophy is anchored in her rationally optimistic attitude toward life with a nod to former longtime congressman and civil rights icon, John Lewis, and his famous quote, “Never, ever be afraid to make some noise and get in good trouble, necessary trouble."

“I want to see things as clearly as they are,” Ross says, “but still remain hopeful always that we can do better. You need to ask the tough questions, remain open to feedback about how to improve things, incorporate the ideas of the frontline staff in the work that we do and push yourself and others to ensure we are not succumbing to group think. This may mean that you have to think about things differently and respectfully challenge the status quo."

Prior to DRH, Ross was medical director for Hospital Medicine at Duke Raleigh Hospital, medical director for the Duke University Health System Transfer Center and as assistant medical officer of quality for Duke University Hospital. She received her Doctor of Medicine degree from the University of North Carolina at Chapel Hill School of Medicine in 2009, earned a Master of Healthcare Administration from UNC Chapel Hill in 2008, and completed her internal medicine residency at Duke in 2013.roles that combined her unique mix of clinical, administrative and leadership skills and experience.

The formal journey for Ross began in 1999 when she decided to pursue an undergraduate degree in finance as a premedical student. It had become apparent to her at the time that healthcare was changing, and the skills required for career longevity without burnout meant more than just learning physiology and being a skilled diagnostician. When she was exposed to the “patient experience” concept, Ross began to understand the impact that health professionals can have if they can advocate effectively for their patients.

Ross recalls her experience as a medical student as a time of some uncertainty as she battled imposter syndrome as the first member of her family to become a physician and struggled with feeling like a “zebra” because her interests in healthcare delivery systems and operations differed from her classmates. She also for the first time observed what it really means to mentor others when two internists noticed her potential and encouraged her to explore options outside of a traditional medical career path. She listened and decided to pursue an additional degree in healthcare administration while working in the performance improvement and patient safety offices at UNC Healthcare.

Once Ross decided to become an internist herself, she was drawn to Duke’s unique focus on developing physician and nursing leaders. She joined the inaugural class of the Management and Leadership Pathway for Residents (MLPR), an experiential administrative residency program for resident physicians who want to deepen their understanding of hospital operations. Ross led the strategic planning process for the clinical re-design of the Duke Outpatient Clinic that resulted in the inclusion of co-located mental health services within their scope of practice. Over three years, sustained and significant reductions in hospitalizations and ED visits were achieved while resident primary care provider to patient continuity and satisfaction improved.

“This gave me an opportunity to think about innovative care models,” Ross says, “and bring people together. That's one of the things that I enjoy doing is bringing stakeholders together who have a shared interest in a patient population, and then using our collective knowledge as well as key business processes to help us come up with a solution.”

Bloom Where You are Planted

After finishing her residency, Ross became a hospitalist at Duke University Hospital where she worked administratively with Chief Medical Officer, Lisa Pickett, MD. Ross served as assistant medical officer for quality from 2013-2015 and from 2015-2017 was the medical director of the Duke University Health System Transfer Center. The time in Pickett’s office was formative, giving Ross insight into health system patient flow and the impact of different medical staff models on access and care delivery, and she took leadership roles in streamlining workflows for key service lines to increase regional and national access to Duke Health inpatient services, among other projects.

“Adia is an extraordinary person,” says Pickett. “Her warm personality and keen process improvement skills make her a truly effective leader.  She has the ability to humbly understand a system so deeply that she is able to partner with teams to improve each step.  This creates a much more efficient process, easier to execute, and with less waste.  In her role as chief medical officer, she uses these skills to create better care for our patients and a better work experience for our team.”

During this time, Ross also served as the assistant program director for MLPR, helping to further refine recruitment processes for the program through oversight of its expansion to the Department of Radiology and formalized joint recruitment processes with the Department of Pediatrics and Surgery. She created a leadership development plan template and coached residents on how to achieve their short-term and long-term career goals. Many of her trainees have taken leadership positions throughout the health system and beyond.

In addition to her role in MLPR, Ross remained actively involved in inpatient resident physician, physician assistant and pharmacy teaching, joining the Department of Medicine faculty in 2013. She has continued her teaching service in each of her subsequent roles to varying degrees to the present day, in 2012 receiving the Duke School of Medicine’s Appleseed Resident Teaching Award, which is given to less than 10% of residents in the core clinical curriculum.

In 2017 she was named medical director of Hospital Medicine at Duke Raleigh, where she was responsible for the care from 45 providers. When Ross assumed the role, the program was severely understaffed and morale was very low, evidenced by increased turnover, lack of engagement in hospital projects and an advance practice provider team with very little independent billing. Ross turned things. Work culture results went from “needs improvement” to “on target,” APP independent billing went up by 36%, and the incentive metric performance improved by over 50%.

At Duke Raleigh, Ross established an expanded practice leadership structure with an associate medical director, an APP team lead, created an education leader with protected time from the PA program, and expanded hospital medicine services to include the pre-operative testing clinic. She also oversaw the implementation of the clinical workflows and the provider staffing model for the newly created observation unit.

Where others see challenge or obstacles, Ross sees opportunity, and the last two years of her time at DRH have brought some of her biggest yet: dominated by the hospital’s COVID response and her roles as medical director of the COVID vaccine clinics at Duke Regional and Duke Health media spokesperson related to the collective COVID response. While serving as a liaison between several organizations and overseeing the creation of DRH inpatient provider workflows, Ross managed some 40 media appearances, communicating directly with the public on a regular basis about the latest COVID news and sharing the experiences of frontline workers.

Despite the pressing need to focus on COVID, one of the most rewarding parts of the job thus far, Ross says, has been “…working with leaders outside of her clinical area of expertise, and helping them create and sustain high performing teams that will help the institution further its mission.” Under her guidance, this has encompassed expansion of COVID clinical trial work from Duke University Hospital to DRH, opening a DRH outpatient pharmacy, expanding and supporting a care re-design team of experts and expanding the clinical teams for the pharmacy, emergency physicians, psychiatrists, hospitalists and ICU providers.