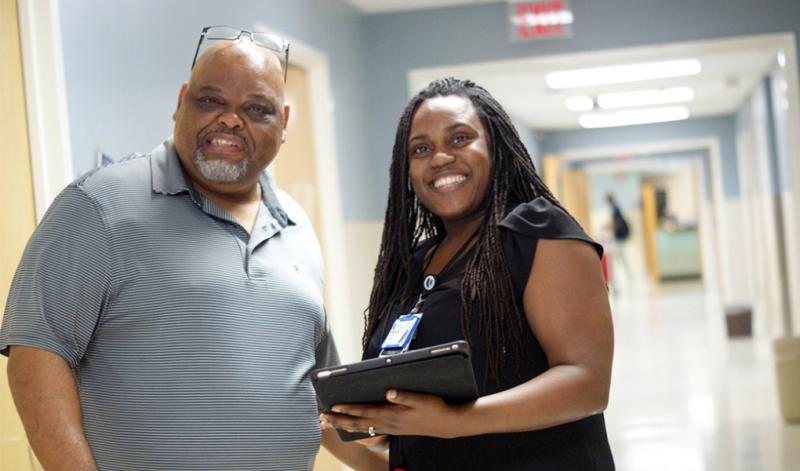 Charity Oyedeji, MD, has been living with sickle cell disease her whole life—she doesn’t have the condition herself, but many in her family do. Her brother died of the disease in infancy, and a cousin with whom she was close died at age 19. As a high school student in Houston, Oyedeji spent summers working at a camp for children with sickle cell disease.

“I’ve always had a personal interest in sickle cell disease,” she says.

Now, as a senior fellow in the Division of Hematology, she’s exploring the intersection of geriatrics and sickle cell disease. It’s a new field because in the past, most people with the disease did not reach adulthood.

Sickle cell disease is a genetic condition in which red blood cells collapse into crescent shapes and get stuck in small blood vessels, causing excruciating pain. The misshapen cells can’t deliver oxygen efficiently, so the condition can cause long-lasting complications, including joint deterioration, pulmonary hypertension, heart failure, small to large strokes, and vision impairment due to damage to the retina or optic nerve. The sickle cell gene, which must be inherited from both parents for the disease to manifest, is more common in people with African ancestry; in the United States, 95 percent of people with sickle cell disease are African American.

Newborn screening and improvements in treatment have lengthened the average lifespan for people with sickle cell disease, with many living into middle age and beyond. That’s good news, but Dr. Oyedeji sees a problem.

“We’re getting better but we’re not where we should be,” she says. “There’s not enough attention given to aging and how the care should change.”