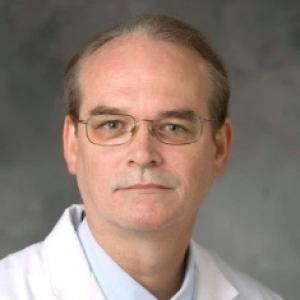 The Spurney Lab has focused on the role of G-protein coupled receptors (GPCRs) in regulating cellular physiology both in normal and disease states, as well as the regulatory mechanisms that modulate GPCR responsiveness at the molecular level.

Publications from Spurney Lab on Pubmed

While the signaling pathways activated by these GPCRs are diverse, common to all these GPCR systems is activation of G proteins belonging to the Gq family. An important downstream signaling cascades activated by Gq is the calcium dependent phosphatase calcineurin. Calcineurin induces gene transcription through dephosphorylation of NFAT (nuclear factor of activated T cells) transcription factors and calcineurin is the pharmacological target of the drugs cyclosporine A and FK506 (tacrolimus). 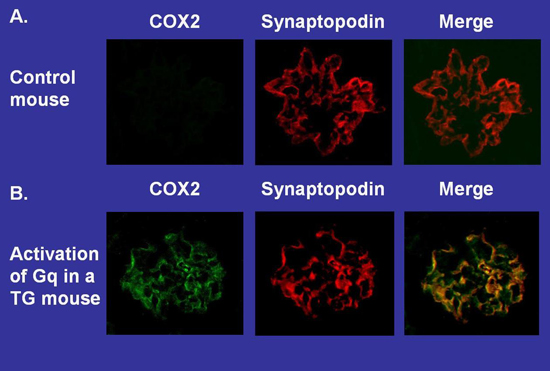 Although NFAT family members were originally thought to be expressed only in cells of the lymphoid lineage, abundant evidence now indicates that NFAT isoforms are expressed in non-immune cells with some family members expressed ubiquitously. We found that podocytes express 2 NFAT family members and that Gq-dependent activation of these NFAT isoforms induces expression of genes implicated in the progression of kidney disease such as cyclooxygenase 2 (COX2). For these studies, we used a transgenic (TG) mouse model to activate Gq specifically in glomerular podocytes. Kidney tissue sections were stained for expression of both COX2 and the podocyte marker synaptopodin, and then examined by fluorescent microscopy. COX2 was not detected in this control mouse although the podocyte marker synaptopodin was easily detected by immunohistochemistry. In contrast, both COX2 and synaptopodin were detected in this TG mouse in similar cellular.

Project 2: GPCR signaling in podocyte injury: Glomerular podocytes play a key role in maintaining the integrity of the glomerular filtration barrier. In order for the filtering apparatus to remain intact, podocytes must be both viable and maintain a complex sieve-like architecture. 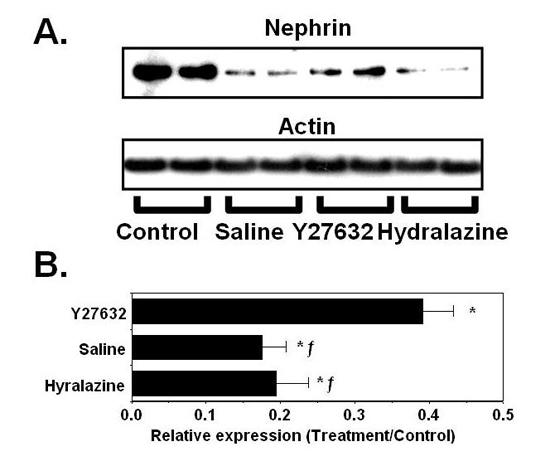 An important downstream signaling pathway activated by Rho GTPases are Rho kinases (ROKs). To study the role of ROKs in a model of podocyte injury we treated mice with the podocyte toxin puromycin aminonucleoside (PAN) and determined the effect of the ROK inhibitor Y27632 on podocyte protein nephrin as a marker of podocyte damage. For the studies, a control group was also treated with hydralazine to reduce systemic blood pressure (BP) to a level similar to the reduction in BP caused by Y27632. Results of these studies demonstrated that treatment with PAN significantly reduced nephrin protein levels in all treatment groups compared to control. This decrease in nephrin protein levels was attenuated by treatment with Y27632 but not hydralazine.