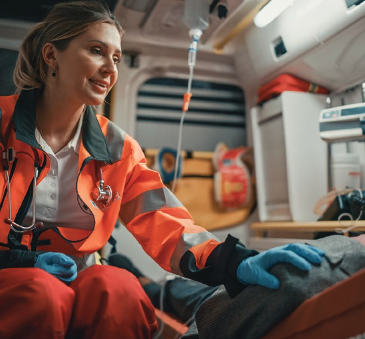 Duke University cardiology researchers are teaming up with North Carolina emergency care personnel—EMS, fire, police, 911 dispatch and community members—across the state in a pragmatic cluster-randomized trial that will test community interventions to improve survival for out of hospital cardiac arrest, a leading cause of death in the U.S.

There are over 400,000 out of hospital cardiac arrests a year in the U.S. with a survival rate of less than 10%. Despite 30 years of efforts by health care professionals, there is scant evidence that cardiac arrest survival odds have substantially improved. Duke researchers are focused on changing that.

The RAndomized Cluster Evaluation of Cardiac ARrest Systems (RACE-CARS) trial covers a geographic area of 62 counties involving eight million residents and expects to enroll 20,000 cardiac arrest patients over a four-year period. It is one of the first U.S. registry-based trials, such that all eligible patients are included and data are efficiently collected in routine care, an approach that has been used with great success in large, efficient clinical trials in Europe. The trial is being conducted by Duke Clinical Research Institute (DCRI) with a $15 million grant from the National Institutes of Health (NIH).

“We've leveraged a highly efficient clinical trial design methodology to be able to address a major public health concern in an ambitious project to test community interventions to improve survival from cardiac arrest,” says the trial’s Principal Investigator (PI), Christopher Granger, MD, director of the Cardiac Care Unit at Duke University Medical Center and a Duke University School of Medicine professor in the division of Cardiology. “If we’re successful, this will provide compelling evidence to guide how care is provided around the country and around the world to improve survival from cardiac arrest.”

For the trial, 62 counties were randomly assigned to intervention or control groups. Interventions are focused on community CPR and AED treatment, 911 dispatch performance, and first responder treatment for OHCA. The goal is to have more patients with cardiac arrest treated with bystander CPR and early defibrillation. Intervention counties are working closely with the trial team to carry out and evaluate trial interventions while the control groups will continue to provide their usual care.

The data collection phase began in July for the trial, which runs from July 1, 2020 through June 30, 2027, and uses the pre-existing Cardiac Arrest Registry to Enhance Survival (CARES) registry for patient enrollment, a platform previously implemented in North Carolina by the RACE CARS team. CARES collects data from 911 dispatch centers, EMS agencies, and hospitals and links that information in a single record.

In laying the trial groundwork, researchers in the last two years have surveyed current practices at the counties, reviewed care metrics in each county, created site actions plans and held in-person site visits to provide improved outcome guidance, focusing on activities that will shorten the treatment time to CPR and defibrillation during the first 10 minutes of the cardiac arrest. Each county randomized to the intervention strategy has worked with RACE-CARS investigators to develop a customized intervention strategy that is tailored to each individual agency’s unique needs and resources, and customized training plans for each level of the prehospital chain of survival.

The Need for Speed

“We believe the greatest opportunity for moving the needle on cardiac arrest outcomes, and the core intervention proposed in this clinical trial, is an intensified focus on improved 911 recognition of cardiac arrest, more rapid deployment of first responder defibrillation, and improved use of bystander CPR,” Granger says.

Studies have shown that there is a 10% decrease in survival for every minute of delay to defibrillation, so that saving even one or two minutes could save many lives. In North Carolina, time from 911 call to paramedic arrival is often more than ten minutes, so firemen first responders, who arrive faster, are key to improving survival.

If successful and nationally implemented, the Duke team’s proposed program of interventions would translate to more than 10,000 lives saved each year.

The primary barrier to better survival rates is not a lack of knowledge but the effective systematic implementation of what works, researchers say.

“The American Heart Association gives us guidelines for cardiac arrest, but only 1% of those are actually backed by true trial evidence,” says Lisa Monk, MSN, RN, RACE-CARS implementation director. “That’s why this is set up as a trial and not a quality improvement project. We’re hoping our interventions are effective at improving outcomes for these patients, and then the results can guide care around the country.”

“This trial is a call from one of our major governing bodies, the National Institutes of Health, to bring evidence to implementation,” says Monique Starks, MD, MHS, an assistant professor in the division of Cardiology and a co-investigator in the trial. “We have been inundated with mostly observational research in this space. We need rigorous clinical trial evidence.”

“Like so many things in medicine, we know what to do to improve survival,” Granger adds. “If you can get CPR immediately started and get the patient defibrillated, about 50% percent of people will survive. The question is how do you achieve that?”

One goal is to improve motivation of the public and of first responders. Community survivor celebrations are an important way to do this, and the plan is to have these in all intervention counties. There are few things in all of life are more gratifying than having a person whose heart has stopped being brought back to life. The goal of RACE CARS is to have this happen more often.

With a systematic, comprehensive systems focus on early CPR and defibrillation, the trial (if it shows benefit) can generate the high-level evidence needed to persuade health and community leaders to prioritize achieving a much higher community-wide level of CPR and AED use, Granger says, pointing to a study* from Denmark that showed an increased bystander CPR rate of 80% after concerted efforts to increase training. In the U.S. currently, about 40% of the time that someone has a cardiac arrest, a bystander performs CPR.

A History of Success

The RACE-CAR trial builds on a rich history of Duke studies to implement guideline-based treatments in acute cardiovascular care, which have led to major improvements in systematic regional approaches to emergency cardiovascular care around the world.

The foundation of the trial dates back to work from 2005 when Granger and James Jollis, MD, RACE-CARS co-investigator and adjunct professor of medicine in the division of Cardiology, recognized that coordinated systems of care in the community could improve survival from heart attacks. Their program from that time, Regional Approach to Cardiovascular Emergencies (RACE), was a statewide initiative that linked EMS systems, smaller hospitals, and larger ones equipped to provide heart attack victims with life-saving therapies that met time limits set by the American Heart Association (AHA). RACE was adopted as one of the national models by the AHA called Mission: Lifeline, which is credited with transforming the care of heart attacks and saved tens of thousands of lives, including reducing mortality by about 25%. Jollis and Granger have each served as its chairman.

In 2010, the RACE model was extended to patients with out of hospital cardiac arrest. Using the CARES registry, data from 11 counties covering 30% of the state’s population showed that the combination of early bystander CPR and bystander or first responder defibrillation was associated with a two-to-three-fold higher odds of patient survival with good neurologic function, and overall there was a 34% improvement in hospital survival with good neurologic outcome. But despite the improvement, subsequent North Carolina data continued to show significant variability in care processes and outcomes, pointing to the need to develop and test interventions on multiple levels. So, researchers pulled a dream team together, went back to the drawing board and secured NIH funding.

Headed up by Granger, Professor Dan Mark, MD, MPH, vice chief for academic affairs in the division of Cardiology and director of the Outcomes Research Group, a 100-member multidisciplinary research team at DCRI, joined the team as a co-PI to oversee clinical aspects and the collection of follow-up data and activities required for an economic sub-study of RACE-CARS.

Starks plays a leadership role in the execution of the trial, along with Sana Al-Khatib, MD, MHS, a co-investigator and professor of Medicine in the division of Cardiology, who oversees the development of guideline-based protocols for study interventions. Rounding out the team are Hayden Bosworth, PhD, co-investigator and professor of General Internal Medicine and Population Health Sciences, who will lead the implementation science aspects of RACE-CARS, and co-PI Hussein Al-Khalidi, PhD, associate professor of biostatistics who manages the statistical design, execution, and data analysis. Additional DCRI staffers for RACE-CARS include Kimberly Ward, MPH, program director, and Steve Vandeventer, NC CARES quality and data manager.

Where You Live Should Not Determine Whether You Live 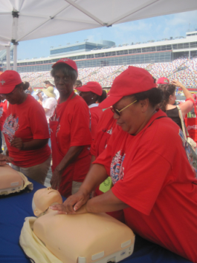 The unique circumstances of cardiac arrest—which often occurs at home with only minutes until irreversible brain damage without CPR and defibrillation—make it a highly challenging public health problem that is further complicated by care fragmentation, regional variation in resources, and care gaps that have an even greater impact on vulnerable populations such as those in rural settings and racial and ethnic minorities.

Cardiac arrest care in the U.S. is fragmented due largely to the lack of integration and coordination among 15,000 locally administered dispatch centers and emergency medical service agencies and over 5,200 acute care hospitals involved in treating victims of cardiac arrest.

Cardiac arrest victims in remote areas already face additional challenges due to distance from major hospitals with underfunding of local agencies contributing to the challenges, too. In rural areas, many first responders are volunteers that too often lack life-saving equipment like defibrillators or don’t have immediate access to them in public places.

“There are thousands of AEDs in our communities, churches, schools, everywhere but all too often they're behind a locked door without a good sign so people can’t find them in an emergency,” says Granger. “If we took all of those AEDs and distributed them to these first responders, we would be so much better off. We’re trying to figure out ways that we can address this issue.”

If the RACE-CARS trial is successful, says Starks, the potential is two-fold: In addition to standardizing care across EMS agencies in the U.S., the hope is that with evidence there will be more public funding available to implement streamlined, guideline-based care for cardiac arrest.

“Bill Gates made the comment during his Harvard University commencement address several years ago, ‘Humanity’s greatest advances are not in its discoveries – but in how those discoveries are applied to reduce inequity.’ That is absolutely the case here,” Granger concludes.

The last thing Mark Heath remembers before waking up in the ICU is climbing out of his dirt track racecar at Friendship Motor Speedway in Elkin, N.C. and firing up one of the Marlboro Red cigarettes he has smoked every day for the past 40 years.

“They told me I grabbed my chest and went down,” recalls Heath, former chief of the White Plains Voluntary Fire Department in Mt. Airy and emergency medical responder. “I didn’t have a pulse for about 23 minutes.”

Heath had suffered a massive heart attack and went into out of hospital cardiac arrest on that day in March 2016, but he’s one of the lucky ones—he survived with good cognitive function. With more than 400,000 incidents of out of hospital cardia arrest each year in the U.S., the survival rate is a bleak 10%.

Mark is now an advocate for cardiac arrest community interventions like those being studied by Duke researchers in the RACE-CARS trial.