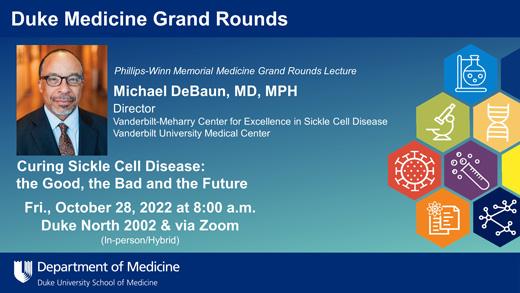 Michael DeBaun, MD, MPH, will give the 2022 Phillips-Winn Memorial Medicine Grand Rounds virtually and in-person at 8 a.m. on Friday, October 28, 2022 at 8 a.m. He will present, “Curing Sickle Cell Disease: The Good, the Bad and the Future.”

This special Grand Rounds is sponsored by the Department of Medicine’s (DOM) Minority Recruitment and Retention Committee (MRRC), the Program for Women in Internal Medicine (PWIM), the division of Hematology, and the DOM Office of Faculty Development and Diversity. It is hosted by Laura Svetkey, MD, MHS, vice chair for Faculty Development and Diversity, J.J. Strouse, MD, PhD, associate professor in the division of Hematology and director of the Adult Sickle Cell Center, Kimberley Evans, MD, chair, Minority Recruitment & Retention Committee, and Daniella Zipkin, MD, chair, PWIM.

DeBaun is a professor of pediatrics and medicine at Vanderbilt University School of Medicine, JC Peterson Endowed Chair, and founder and director of the Vanderbilt-Meharry Sickle Cell Disease Center of Excellence. For over 25 years, his research on sickle cell disease has led to fundamental changes in understanding the clinical epidemiology, pathogenesis, and treatment of strokes and silent strokes in children and adults with sickle cell disease.

He has been the principal investigator or co-leader of eight NIH or foundation-funded controlled clinical trials designed to prevent strokes in children or adults with sickle cell disease in North America, Europe, and Nigeria. DeBaun is an elected member of the National Academy of Medicine (2009). Based on his significant contribution to advancing the care of children and adults with sickle cell disease, he received the prestigious international 2014 Ernest Beutler Prize and Lecture in Clinical Science from the American Society of Hematology.

Phillips drove the creation of and then led the Duke Adult Sickle Cell Program and was Associate Director of the Duke-UNC Sickle Cell Center. He founded the Department of Medicine Minority Recruitment Committee (MRRC). He is remembered as a skilled and compassionate clinician and as an outspoken advocate for human rights. He died in 1994 at the age of 39.

Michelle Winn, MD, was an outstanding scientist who contributed major breakthroughs in unraveling the causes of focal segmental glomerulosclerosis, a common cause of end stage kidney disease particularly in African Americans.  She is remembered as a role model, devoted mentor, skillful chair of MRRC, and a wonderful and beloved colleague. She died in July 2014 at the age of 48.